Edit
watch 01:36
We're Getting Mutants in the MCU - The Loop
Do you like this video?
Play Sound

Canadian Health&Care Mall is part of the Eva Pharmacy fraud.

The actual Minnesota Board of Pharmacy has stated clearly that the license on this site is a fake, and even have a page devoted to Canadian Health&Care Mall on their websites's FAQ. They provided a statement to our investigators, pointing out all of the discrepancies in it.

The "About Us" section of Canadian Health&Care Mall sites includes a heartwarming description of its beginnings as a "store of so-called 'useful things,'" written in rather clumsy English. They brag about selling "medication of the best possible quality, licensed and working." And since we've already seen what their license is worth, we conclude the likelihood of getting any drugs that work is ... ?

The site lists its medical staff as "Dr. Edward B. Armington" and "Dr. William Grant," both with impressive resumés. Apparently they and their team also have time on the side for modeling, as gettyimages.com is selling some of the same stock photos:

These same fake credentials are found on the "Global Canadian Online" spam brand.

This is a common trait across most of the Yambo Financials sites. My Canadian Pharmacy also uses stock photos as portraits of their so-called "physicians" and "staff."

Additionally, the original picture of the female doctor is also found in Getty Images.  Its modified version, used in Canadian Health&Care Mall, is found in the website of CapitalAir Corporation, Ontario. The model is unlikely to be a real physician, as another picture of hers in Getty Images suggests.

The "contacts" page includes addresses for offices in Ontario, Louisiana, and New Delhi, as well as photos of the buildings they claim to occupy at those locations. They even offer to provide a "face to face audience" with one of their managers to anyone who wishes to visit them on site. 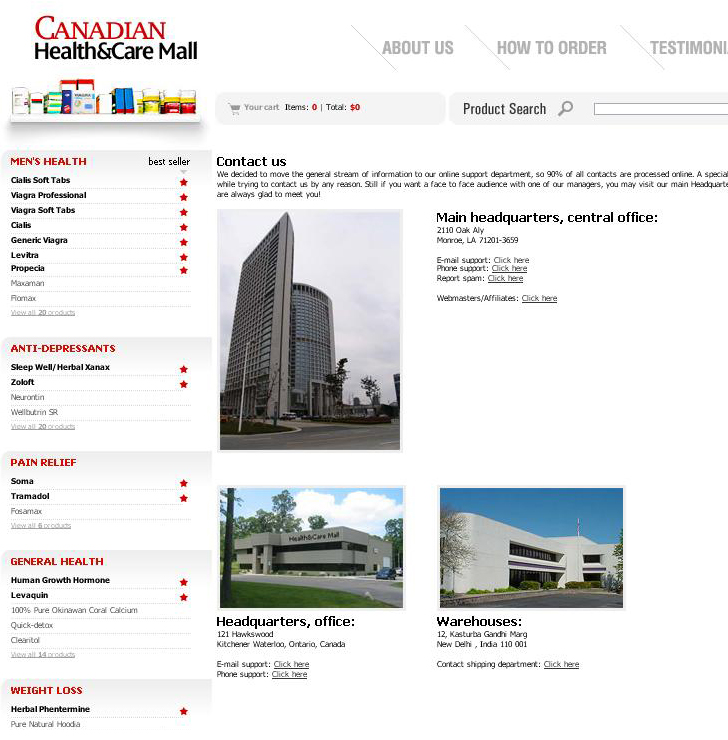 But comparing the buildings in the photos to Google Maps satellite images of those addresses shows residential areas with no sign of large buildings like these:

In more recent sites, the same building has been teleported to Kingston, ON, Canada:

The address in Waterloo, ON turns out to be a residential neighborhood:

The third location, an address in New Delhi, is too inexact for Google maps to locate it; it is unclear if such an address actually exists.

Some sites have an SSL certificate to encrypt the transmission of sensitive daata such as credit card information, others do not. In either case the site claims to provide encryption with a 256-bit level. Here is an example of a false claim. On the right is a padlock icon representing an encrypted link, together with a false claim to be using encryption. On the left, the browser reveals the true status - no encryption

In 2014 the method changed from using stolen identities, to using a fake name generator service, such as the one found at http://www.fakenamegenerator.com. These fake ID sites will generate real looking names, addresses, phone numbers and credit cards to simulate real identities. The aim is to make it more difficult for registrars to identify fake registrant data. Only the email address will be true, so that the registrant can handle information requests from the registrars.

Sample sites and registrars who were sponsoring them[]

Sample IP Addresses of their websites[]

Their websites tend to move from one IP to another at short intervals. These were in use in mid August 2017.

History of the Spam - followed on from My Canadian Pharmacy. They have since abandoned the use of image servers.

In the past they have used the same process of running name servers, web site servers and image servers on hijacked hosts.

For example, examining the html source of a sample web page at any one time will have found

In total there were 8 different IP addresses involved, all running a trojan proxy name server or web server without their owners' consent.

This method has now been abandoned after a comcerted campaign to report these hijacked hosts and to have them cleaned.

MycanadarxStore appeared in late October 2007. Its "about us" section is highly similar to that of Canadian Health&Care Mall, including the photos of "Dr. Edward B. Armington" and "Dr. William Grant." However, it differs from the other Yambo sites in that it does not share the image server IP address(es) they all use. It shares its nameservers with Prestige Replicas, not any Yambo sites. So this appears to be a case of plagiarism rather than affiliation.

How to Report this Spam[]

In addition, to remove them as name servers, the subdomain address records (eg for ns1 and ns2) need to be changed to a non-routable address, such as 0.0.0.0 or a blackhole address within their own address space.

Bulker.biz is the sponsor organization behind this type of site. They pay spammers to promote it, and they don't shut down illegal spammers.

Community content is available under CC-BY-SA unless otherwise noted.
Advertisement